Menu
Skip to the end of the images gallery

Skip to the beginning of the images gallery
-33.03%


Products are subject to improvement without prior notice.

Want to place bulk order,but the express shipping is too expensive?

Model HL-YMCI Mixer is our company’s first generation mixer, the first semi-automatic alginate mixer on the domestic market. This equipment is used for making false teeth; it replaces the handwork of mixing the Impression Material. It has characteristics of labor-saving, fast, well mix and less bubble.

[1].Power switch: a black boat-shaped switch behind the machine.

2). Names Of Parts And Their Operations: 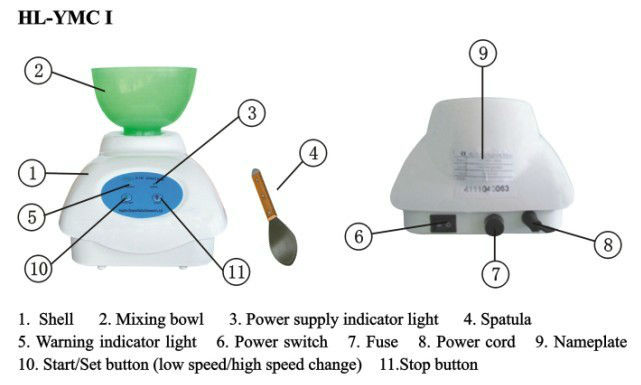 1). Put the cleaning and disinfected mixing bowl into the tray, turn clockwise to lock it.

2). Let power plug connect to the electric socket with grounding, turn on the power switch 6

4). Put the spatula into mixture, press Start/Set button10 to start at low speed (the liquid and powder will not easy to spill out when in low speed), close the spatula along the mixing bowl and move it according to the rotate direction.

5). Press Start/Set button 10 again, it will rotate in high-speed . The spatula should along the wall of mixing bowl, it’s better for mixing, after 20S the alarm light will flash to notice user to use the mixture as soon as possible.

7). Anticlockwise rotate the mixing bowl, then take it out, and clean it

1. All the items at TREEDENTAL store are covered with a warranty. The warranty period is indicated in each item's description.

2. Warranty covers a replacement or repair of the faulty item. Contact us immediately for any issue that might happen to our product within the warranty period which is not man-made. You simply need to fill in the TREEDENTAL International Warranty Form here.

4. If your purchased item is out of the warranty period, then you can report the issue to us into [email protected] and our technical support team will issue you a report for the repair fee based on the kind of the fault.

5. Replacement: In case the product received comes with manufacturing defects, the buyers are entitled to request a product replacement within 7 days of receiving the item. To request a replacement, the buyers are required to provide photographic as well as video evidence of the product’s manufacturing defects which can be sent to our email: [email protected] If the case is deemed valid, then we will cover the related cost to deliver a replacement.

The price displaying on website is factory price only, not including any shipping cost, your country’s import tax, customs clearance fee and insurance.

Shipping Cost
We can ship out the goods to you by three ways: Express ( DHL/UPS/FeDex/EMS), Air Shipping or Sea Shipping.

Express is the better way for order which the weight is under 10KG, it normally takes 4-7 days for delivery and delivery to your door directly.

Air Shipping is a good way for heavy order more than 100kg if you need the order urgently. It normally takes 7-10 days for delivery. But you need to do the customs clearance at your airport and pick the goods up there.

Sea Shipping is the lowest-cost way for big order, such as dental chair/dental unit order. It normally takes 30-60 days for delivery. But you need to do the customs clearance at your seaport and pick the goods up there.

The shipping cost which we charge you when you do the Checkout on our website is just for the Express shipping cost, if you want to use a cheaper shipping way, such as Sea Shipping, you need to contact us for the quote.

For the Air Shipping and Sea Shipping, if you don’t want to take the trouble to do the customs clearance and just want goods delivery to your door, we also can do that for you in additional charge.

If you want to buy the shipping insurance for your order, you can buy it together with your order here: Cargo Transportation Insurance,PICC